Rogue Palisade is a boss that was added with the release of the game. It has a rare variant, Palisade, which can spawn instead of it with a 5% chance.

Rogue Palisade has a black hexagon base with a trap launcher on each edge of the base, and with a minion spawner on each side of the base.

Rogue Palisade's traps are not a large problem, they have low health and can be easily penetrated. However, they still deal high damage, so keeping some distance between you and Rogue Palisade is ideal. The main strength of Rogue Palisade are its minions: they have high damage, capable of killing glass-build level 60 tank in 4 bullets. They are also pretty durable and respawn fast. The main vulnerability of Rogue Palisade is that both types of its ammunition can only deal damage to tanks with low speed, and minions can be easily outrun by most medium-speed tanks.

Having said that, Rogue Palisade can barely deal damage to tanks with some mobility. Very slow tanks like Mace will not work along with rammers, while almost every other tank will. In order to dodge most projectiles, run in a circle around Rogue Palisade, keeping some distance between traps and running away from minions. While you are dodging Rogue Palisade's traps and bullets, you can safely damage the boss itself. Its traps do not have very much health and can be easily penetrated. This way, you will be easily dealing damage to Rogue Palisade.

Be careful about other players. If another player attacks you, retreat and focus on the player. You will not be able to handle both traps, minions, and other player's projectiles. You can escape from Rogue Palisade easily, and kill the player. After you killed the attacking player, you can safely continue your battle with Rogue Palisade.

Rogue Palisade fighting with a Splitter 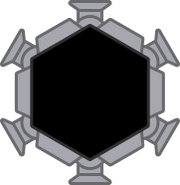 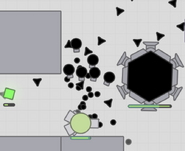