Sassafras is a boss that was added on February 4, 2019. It is notable for crashing the server upon spawning.

Sassafras has a hexagon beige base with an "Eye" in the center. "Eye" has the shape of a black circle and a yellow circle inside that is offset towards the front. The "Eye" faces wherever Sassafras is currently moving. Around the six auto-turrets are located, three Destroyer (Extinctionist) turrets, three Builder turrets, alternating after each other. On each outer side of the base, a minion spawner is located.

Minion which boss spawns have a hexagon base, with the same "Eye" in the center. They also have gunner turret.

Sassafras spawns Destroyer/Extinctionist bullets and blocks, but both have a kind of low bullet health and can be easily penetrated and dodged. The main firepower of the boss are the minions: respawned every 15 seconds, maximum 6. Minions attack from all sides, and have decent damage, but can be killed within ~8 seconds.

Note: This assumes that Sassafras did not crash the server.

Although Sassafras may look powerful, in fact, it is not a strong boss. The most effective tanks are bullet spammers. It moves too slow to rush into traps, Sassafras minions can overwhelm your drones and minions. Bullet spammers can kill it easily. But be wary, Its minions can chase you at long ranges and won't give up easily, especially if your tank has a high danger value.

In order to do so, one must first eliminate all the minions. Try to be careful because they have very high damage but no need to retreat, just try to take them out one by one, or if they are in groups focus the closest group to, but the longest from Sassafras. Do not get distracted, as minions have good damage, and spreading bullets on all sides is also an effective way to finish them off.

After all of the minions are dead, attack the boss. You will easily penetrate the blocks and bullets, just do not forget to move left-right to trick the boss into missing more bullets. It will take considerable damage, approximately 20% of the health bar. After that, again kill the minions which respawned and attack the boss. It will soon be dead.

Sassafras was confirmed as a Hemisphere on December 4, 2020 by C4. It unique ability to always crash the server (as well as the fact that this has never been fixed) has been a subject of speculation by many, not just Lore Makers.

The fact that the Sassafras can spawn with the name “hemisphere” also supports the fact this it is one.

Sassafras idling with its minions with classic diep theme 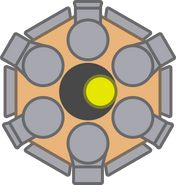 A high resolution image of Sassafras

Sassafras locked on as shooting star 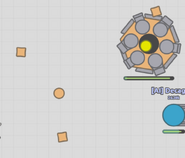 Sassafras locked on someone

Sassafras on the death screen.