The Slider is a boss that was added on March 22, 2020, and is one of three rarest bosses in the game.

Slider has an irregular green hexagonal base, similar to Green Runner. On the sides, it has two drone launchers and a trap launcher in the back.

Slider has high speed and medium health. It uses its trap launcher to primary propel itself, but traps also have high penetration and damage. Slider also spawns Green Runners at a medium rate, each of which is identical to crasher.

Slider is a surprisingly strong nest defender and is somewhat slower than Vanguard. Firstly, any tank that has a medium speed and is slower than a Slider will die since Slider will ram the player. Secondly, Slider also spawns green runners, which will not allow you to lure it over a rock and hit it from the opposite side normally.

The first thing to note when countering Slider is that if you are slower than it, you are definitely screwed. Only a few tanks with high RoF, recoil, and penetration will be able to kill Slider. Gatling Gun is one of such counters since your recoil is enough to be slightly faster than Slider. Machine Gunner will only be slightly slower than a Slider but will be able to kill it if the player will trick Slider to collide with rocks from time to time. If you do not have bullet spread, you will also be screwed. 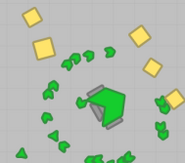 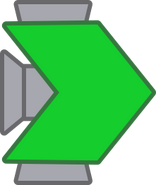 A high resolution image of Slider
Community content is available under CC-BY-SA unless otherwise noted.
Advertisement