Snowflake has three turrets on top of its base, which shoot fast and high-damaging bullets. They have a noticeable firing delay and can be avoided. If all bullets will hit a player, they can eliminate 90% of the health of the glass-build tank.

Decentralizer turrets on top of each Snowflake Shard deal high-damaging, slow bullets but with incredibly low penetration. If they go through bullet wall they will barely deal damage to you, and only 3 can attack you at once.

Drones are the main force of the Snowflake: they are fast, respawn extremely quickly and deal decent damage. They will outflank you from all sides while dealing steady damage that will eventually kill you.

Spawns from the death of a Snowball Sanctuary.

Because of its high number of projectiles, you will be outflanked if you are not using high spread tanks or taking cover. If you can penetrate the drones, you will not be able to deal with constant damage to the Snowflake because of other bullets. If you are using a focused tank, you will penetrate its fire and deal damage, but drones will kill you faster. If you are a minion tank, Snowflake will just kill you when you will run out of minions. This means, do not fight a Snowflake in solo unless absolutely necessary, you will likely die.

If you are alone against the Snowflake - flee! It does not have a high FoV, so you can escape fast. Focus on drones and obliterator bullets - together they can kill you in no time if you are distracted.

Fight in teams, or make someone distract the Snowflake. While its drones and bullets will be gone, Decentralizer bullets are surprisingly easy to penetrate. If Snowflake focuses on you and has less than 30% of health, do not stop firing. At this point, you can just outgun it. After the Snowflake is dead, move away from the point you killed it at, so that you will trigger all the shards without triggering the core.

Snowflake Shards have spawned to avenge the Snowflake!

The Snowflake has a clover hexagon body and on each other side of hexagon, an Obliterator turret is located. On each edge of the base hexagon, a missile deployer is located.

Snowflake missiles are spawned at a pretty low speed and have low speed by themselves. Dodging will not be a problem. Furthermore, they can be easily penetrated.

The Obliterator bullets are the same, but in the absence of drones, they are now easy to penetrate.

Spawns when a Snowflake dies.

At this stage, most tanks with high reload and penetration can finish off the Snowflake. However, if you stop firing, you will still take massive damage from it.

A Snowflake Shards have spawned to avenge the Snowflake!

The Snowflake Shard has a blue hexagon base. On the two sides in the front, two drone spawners are located. On top of it resides Decentralizer turret.

Drones are weaker than Snowflake: lower speed, damage, and penetration. Almost any tank can kill them.

Decentralizer bullets are also weaker: they do some damage when collided, and barely do damage when penetrating through bullets. Also, its speed is very low.

Spawns when a Snowflake dies.

The Snowflake Shards will move to you very quickly, but they have low health, even for a miniboss. Due to their speed, move away from them while firing. After the first shard gets killed, five more will usually come.

Then, try lining them up in a straight line, so you can damage 2-3 shards at the same time. Do not be afraid if a shard is close: focus all your firepower on it. If it is on low health, do not be afraid that it will ram you.

Try to move them away from Snowflake Core, because together they can be deadly. Take advantage of their drastically increased speed compared to Snowflake Core. 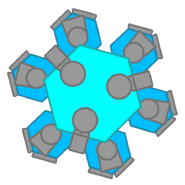 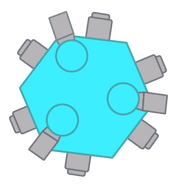 The snowflake shards attacked by a splitter 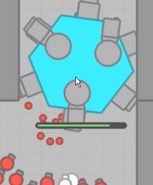 The snowflake core attacked by a splitter 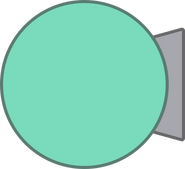 Snowflake attacking me..
Community content is available under CC-BY-SA unless otherwise noted.
Advertisement