In-game
The Sounder is a Tier 4 Tank that branches from the Cruiser, the Borer, the Twin Sniper and the Mini Lightning.

This tank has longer range and has faster drones then the Cruiser.

The Sounder upgrades from the

Twin Sniper and the

The Sounder upgrades to the following: 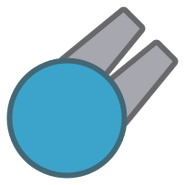 The Sounder with a transparent background.
Community content is available under CC-BY-SA unless otherwise noted.
Advertisement