The Spawner is a Tier 3 Tank that upgrades from the Director and the Auto-Basic at level 30.

The Spawner has a circular body with a three-section minion spawner in front.

The Spawner is a minion tank that controls Minions instead of shooting bullets. Minions are controlled similarly to drones, but stay a certain distance from their target instead of ramming into them. Each minion of the Spawner has a small Basic gun with increased reload and average power. The Spawner can control a maximum of 5 minions at a time (4 in the restored version).

The Spawner upgrades from the

The Spawner can upgrade to the following: 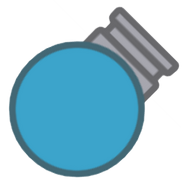 A high-res picture of the Spawner.
Community content is available under CC-BY-SA unless otherwise noted.
Advertisement