The Squarefort is a boss that was added on July 19, 2018. It is currently on the TESTBED bosses branch, mainly because of the fact of how blatantly overpowered it is.

Squarefort has incredible firepower, capable of penetrating any bullet or ammunition in a matter of seconds. Its annihilator bullets have very strong penetration, high range and speed, and lethal damage. It has a very high range, and its S-hunter turrets are only slightly weaker than annihilator bullets. Its destroyer turrets have high spread, high damage, and bullet speed. They are fired at a single volley, giving the boss immense area control and are nearly impossible to dodge. All of the bullets have very high health and penetration.

Squarefort has an immense bullet penetration, range, and area control, rendering all distractions useless. It can perish any normal tank, even Coiffure, at a single discharge. It has a huge size, so hiding behind rocks will not help. Furthermore, hiding in your base will not help if the Squarefort is close. If you ever encounter Squarefort, you have only one option - RUN, R U N.

But as a downfall, running away may be extremely difficult. Try to get to the opposite side of where you are, and keep the maximum possible distance from Squarefort. Get away as soon as you see its bullet volley, or else you may not be able to escape and you will meet your essential demise. If you have 3 or more rocks around you, try to go through them so that you can make further distance with Squarefort.

Killing Squarefort is a major challenge, far harder than killing any normal boss. Firstly, never fight in solo, teams, or small groups, you will die. Squarefort will perish you before you will even be able to hit it. Fight in large teams, at least 6 players, with correct tanks and strategy. Firstly, make sure most of your team will pick heavily defensive tanks, like Kukri or Tera Trapper. You will also need some drone tanks to make sure they will partially block the bullets and add up some defense. Secondly, make sure to have at least two attacking tanks, ideally Splitters. They should maximize bullet stats, and try to deal as much damage to the Squarefort as possible. Your defense will fall eventually if you will be too close, so you will have to eliminate all health of Squarefort before it will kill you all.

VPN will not work, since Squarefort's random volley of bullets will totally end you, and it will constantly be hunting bots and players down thanks to its immensely long range. 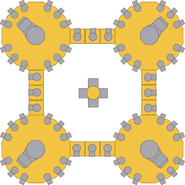 A high resolution image of Squarefort
Community content is available under CC-BY-SA unless otherwise noted.
Advertisement