Storm Bullet (x10)
The Storm is a Tier 3 Tank that upgrades from the Twin, the Flank Guard and the Pelleter at level 30. The main focus of its branch is having multiple guns, almost covering the entire tank.

The Storm has a circular body with ten small guns in total, spread all around its body.

Bullet Stats
(compared with the Twin)

Bullet Stats
(compared with the Pelleter)

x1
The smaller bullets but the higher gun count of the Storm make it better at overall area coverage. Its bullet power is relatively similar to the Pelleter's, so its bullets have high health, penetration, and resistance at the cost of being smaller and dealing much less damage.

The Storm upgrades from the

The Storm can upgrade to the following: 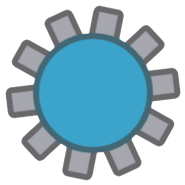 A high-res picture of the Storm.
Community content is available under CC-BY-SA unless otherwise noted.
Advertisement