The Superbird is a boss that was added on July 14, 2019. Currently, it is on the TESTBED bosses branch.

Superbird has an electric blue circular base with a Minigun turret in front and two thrusters at its rear. On the sides, it has two Shrapnel auto-turrets.

Superbird has a relatively high speed, and its thrusters nearly completely neglect the recoil of its minigun. Its minigun has high damage and speed, but medium bullet health and penetration. Its nukes deal high damage and have high penetration, but have low health.

Although the Superbird does not have much firepower, it still has high speed and is faster than most tanks. Most tanks with high penetration and RoF can easily out-penetrate Superbird. But due to its speed, it can easily get close and kill you or ram you. As such, it is advised to upgrade the movement speed and reload as much as possible.

Tanks that are faster than Superbird and have high penetration can easily outrun and kill it. Propeller branch will not work, but tanks like Twinceptionist can utilize its recoil and deal high damage. Gatling Gun branch with maximum movement speed and reload can also outrun the Superbird. If you are faster than the boss and have high penetration, it will die. If you are slower, you will die. 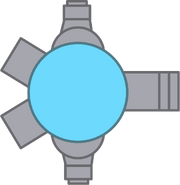 A high resolution image of Superbird
Community content is available under CC-BY-SA unless otherwise noted.
Advertisement