The Swarm Square is a boss that was added on July 16, 2018. Currently, it is on the TESTBED bosses branch.

Swarm Square has a yellow square base with a Quintuplet auto-turret on top and Machine Gun turret at the back. In front, it has two stacked Minigun turrets. The second is very short, but the first one is far longer. On each side, Swarm Square has a swarm drone launcher.

Swarm Square has normal health and pretty low speed, however, it slightly propels itself forward with Machine Gun turret at the back. Its swarm drones are not very strong, as they have medium speed, spawn rate, and low health. They, however, deal high damage if collided with a player. Its auto-turret has low bullet speed and penetration, but still decent damage. Its main stacked turret is very strong, has high penetration, bullet speed, and lethal damage. It shoots in a Stacker-bullet style, making most defense against it useless.

Swarm Square's most types of ammunition are not very strong, as they have mediocre penetration. However, their damage is still high and they can easily kill an unaware player from distance. The main strength of Swarm Square is its main turret, which fires fast bullets that can easily kill any non-Smasher branch tank from a single hit. Their penetration is immense, and they can eliminate any drones, minion, or trap very fast. As such, it is not advised to attack Swarm Square in solo.

Attacking it with multiple players is advisable. Firstly, make sure that the distracting player is either very fast and has decent health, or has excellent defensive capabilities, like Kukri. As the distracting player with high speed, maximize health and movement speed to avoid the bullets and swarm drones. As the distracting player which creates a defensive shield, maximize bullet health and penetration, to make sure you will last for long enough. Then, get another player to deal damage to the boss from the side. Splitter or any other tank with high DPS is ideal for this, as you will eliminate swarm drones, penetrate bullets and deal high damage. This way, Swarm Square will fall fast. 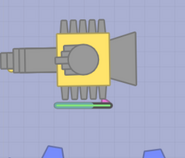 Swarm Square in a pentagon nest
Community content is available under CC-BY-SA unless otherwise noted.
Advertisement