Tartarus is a dark blue Celestial in Woomy-Arras.io.

The fourteen Guerilla drones that Tartarus can have at once are extremely dangerous. Outrunning them is impossible, even Shooting Star cannot outrun the drones. The bullets the Guerilla drones spawn are supposed to do very little damage, but just like everything associated with Celestials, they are meant to kill you. The Vulcan auto-turrets have a concentrated spread and will diminish crowds of tanks if there are not enough bullets. But, keep in mind that the Vulcan turrets have very little range, and cannot target players that far. The traps can also offer a problem, as Tartarus' drones can hide behind and in the traps. 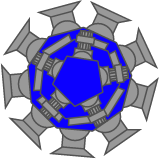