The Trap Dweller has been added at a unknown release date. It is a TESTBED Boss.

The Trap Dweller has a yellow square body with a Hexa Trapper turret on top. On the corners, it has 4 Assassin ( 1 in each corner). On the sides it has barrels that look like a Giga Trapper ( 1 on each side ) The trap barrels are quite weak than they seem. Ask Stubby101 for info. I also used this boss in a unrelated server. Actually, its arras mayhem.

Trap Dweller is quite weak. However, do not underestimate it. Their Assassin turrets can ambush you and your team. Also, you wont be damaging this boss unless you have the tanks you need below. Traps are weaker than they seem. Also, if you need the tanks to defeat the boss, here it is. Apidae, Rainmaker branch, and Streamliner. Get at least 2 or 3 Surges.

Currently does not spawn unless spawned by ST and Overseers. It will be hard to defeat once it spawns. Get prepared..

Now that I have explained it, it should be hard for you. You need at least 4 Hexa Builders, at least 3 DPS tanks or Apidae, proceed to destroy the bullets until you can destroy the boss. Using bullet spammers is effective for the low RoF Assassin turrets. The 4 Streamliners should block the Assassin turrets. Once they have blocked it, get your 3 DPS tanks: Apidae, Rainmaker, and Optic branches. Use Apidae for swarming the Traps. Traps are very weak, as they are probably the weak points. Now proceed to damage the boss. Once you kill it, congrats! You defeated the Trap Dweller! 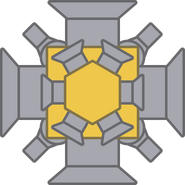 A transparent picture of Trap Dweller