The Trape-Fighter is a boss that was added with the release of the game.

The Trape-Fighter has an orange irregular heptagon base, similar to Grouper. On the front part of Trape-Fighter Pelleter turret is located. On its sides two drone spawners are located.

The Trape-Fighter has a powerful front turret that shoots fast, high penetration, high-damaging bullets. It is hard to outgun the Trape-Fighter, as it shoots bullets very fast. Bullets have yellow color, typical for most Nest Defender Bosses.

Its side spawners spawn drones like groupers, the same as Crasher. They behave slightly differently and usually attack player from flanks.

The Trape-Fighter moves at a relatively high speed, but far lower than Comet.

The Trape-Fighter spawns randomly, determined by a randomizer.

The Trape Fighter's groupers are not a large problem, however they still play an important role. They drain your Shield, thus preventing fast regeneration. They come from flanks, meaning that focused tanks just cannot handle them.

The main ammunition of the Trape-Fighter are bullets: they are very fast and powerful, and deal high damage. In order to penetrate them, one has to pick a highly focused tank, like Trapliner. Together with drones, the Trape-Fighter features great offensive capabilities and can catch up slow tanks like Mace and kill them thanks to its speed. Its high speed also means it will break through minions, and drones will deal low damage because of high-penetration bullets.

Surprisingly, if you are a Trapper branch, you can force the Trape-Fighter to take full damage against traps. Make sure to upgrade your movement speed a little bit, as well as regeneration. If you regenerate fast enough, you can neglect the damage of groupers, or trick them to ram into traps by moving with high speed. The Trape-Fighter will take damage and will be unable to damage you through all the traps.

Another way to kill the Trape-Fighter would be to have one player distracting it. The Trape-Fighter has a high FoV and will catch up on its prey just like Dropship (Boss), and thus shares Dropship's weaknesses. At this time, you can deal with heavy damage to the boss. Please note, do not try to attack the Trape-Fighter if it starts to lock on you unless it has really low health.

This boss, along with others like Vanguard (Boss), Collider (Boss), Etc may be crashers and crushers that successfully gained tank weaponry, as the point of crashers and crushers were to kill and gain tank's weaponry, and flat out says as much in this list of Arena Closing Splashes, in row six. Most of them haven't achieved this, but for the few that did, they came back as Bosses.

The Trape-Fighter locked on someone 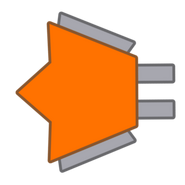 A high resolution image of the Trape-Fighter

Trape-Fighter in its natural habitat

Player seeing a Trape FIghter try to kill a AI
Community content is available under CC-BY-SA unless otherwise noted.
Advertisement