Trapper Trap
The Trapper is a Tier 2 tank that branches from the Basic at level 15.

The Trapper has a circular body and a wide trapezoidal gun supported by a short rectangular base.

Trap Stats
(compared with the Basic)

x3
The Trapper is very different from the Basic. It can deploy traps, which are a different type of bullet that lose momentum over time and eventually stop. They have a much longer lifespan than the average bullet, but they will still despawn after some time. Traps have high penetration and resistance and deal high damage to anything that touches them. The traps launched are noticeably smaller than their Arras.io counterparts. The Trapper also has an enlarged Field of View compared to the Basic.

The Trapper upgrades from the

The Trapper can upgrade to the following: 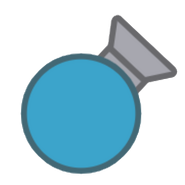 A high-res picture of the Trapper. 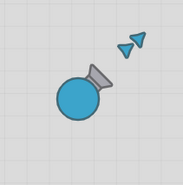 The Switcheroo in its Trapper form
日本語
Community content is available under CC-BY-SA unless otherwise noted.
Advertisement