The Triplet is a Tier 4 Tank that upgrades from the Triple Shot and the Recruit at level 45.

The Triplet has a circular body with three regular size guns all pointing forwards.

The three guns of the Triplet give it a very fast rate of focused fire. It has many of the qualities of the Twin, but has three guns instead of two.

The Triplet upgrades from the

Triple Shot and the

The Triplet can upgrade to the following: 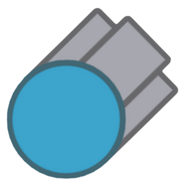 A larger picture of the Triplet.
Community content is available under CC-BY-SA unless otherwise noted.
Advertisement