Ingame
The Twinceptionist is a Tier 4 tank that branches from the Ceptionist.

The Twinceptionist looks like the Twin, but it has a dark circular turret on top of the body with a rectangular barrel on the turret.

The Twinceptionist shoots weaker bullets with dark barrels in front of them, but twice as fast due to it having two barrels. Like the Ceptionist, the turret does nothing and is there for decoration.

The Twinceptionist upgrades from the

Ceptionist at level 45 and does not upgrade any further. 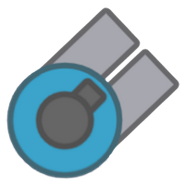 A Twinceptionist, which i think is in high res....
Community content is available under CC-BY-SA unless otherwise noted.
Advertisement