Ultimate has medium health and medium speed compared with other bosses. Ultimate always spins no matter what. Ultimate's tri-triplet turret is unique to this boss and can only lock on a single player. Bullets of this turret are pretty strong, have high penetration but low health. Traps of Ultimate are powerful, they have high speed, health, and damage, and protect the boss. Annihilator bullets of the Ultimate are very strong, have high health and penetration, but low speed and range. It spawns in crashers, which have low health, decent damage, medium penetration and fast speed.

Ultimate has a strong defensive and offensive capabilities, and can easily defend any attacker. The first thing to note, that bullet spammers are the only tanks that can stand a chance against Ultimate. Firstly, that's because Ultimate also spawns strong drones that can outflank the player and deal heavy damage. Secondly, Ultimate has a triplet auto turret, then can easily penetrate bullets of tanks with a low rate of fire. As such, minions and bullet spammers are the best tanks against this boss.

As a bullet spammer, you should vary of the traps and annihilator bullets. Annihilator bullets can be dodged because they have low speed. However, if you are caught off-guard they may kill you. Secondly, in order to get rid of traps, it is advised to have some rocks or walls around you. This way, most of the traps will bounce off obstacles, and you can hit the boss in meanwhile. Since Ultimate also spawns drone, the Machine Gun branch is ideal to kill this boss, as all the drones and bullets will likely be penetrated by your bullets. If you are low on health, retreat, and regenerate your health. Then, again attack the boss, which will not have maximum health, and never let your Shield disappear, so that you can regenerate faster.

Fighting in groups against Ultimate is very efficient, as the Ultimate will focus its drones and bullets on a single player, while it will be more vulnerable from the other sides. One player will be distracting Ultimate, while the other will be attacking the boss. 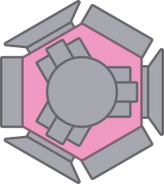 A high-resolution image of Ultimate

A Ghidorah fighting off an Ultimate.
Community content is available under CC-BY-SA unless otherwise noted.
Advertisement