Ultimate Multitool is a boss that was added with the release of the game.

Ultimate Multitool has a green circle base. It has 3 different barrels:

All turrets of Ultimate Multitool are automatic: meaning that usually, only 2 are active on you. One turret releases slow, but powerful bullets. Second one releases stationary high-damaging blocks and the third one behaves like a basic auto-turret.

All turrets of the Ultimate Multitool are automatic: you can always avoid at least one. Avoid the Decalibrator turret: it spawns stationary, but high-damaging blocks capable of killing a glass-build in a matter of seconds. They have lots of health and decent speed and make it harder to fight the boss. The Warden Turret, however, can be neglected by high penetration bullets, and with enough bullet speed and reload, the Decentralizer bullet can be easily dodged. This way, you can somewhat slowly, but effectively kill an Ultimate Multitool.

Fighting in groups makes jobs far easier: you will only have to deal with one turret. Again, try to be at the side of Warden Turret as it has mediocre penetration and can be dodged. This way, you can maximize the chance of killing the Ultimate Multitool by yourself.

Ultimate Multitool near Orangicus, attacked by a Splitter 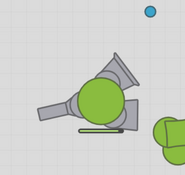 Ultimate Multitool locked on someone 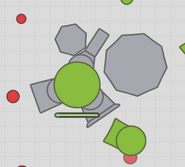 Ultimate Multitool near some rocks (the bullet and block created a perfect tank))
Community content is available under CC-BY-SA unless otherwise noted.
Advertisement