Unholy Hellbringer is a boss that was added on unknown date. It`s avaliable only for developers.

Body of Unholy Hellbringer is a 12-side shape. It has 2 turrets with 3 swarm barrels on its front and 1 barrel on its back. Has rhomb-shaped hole on its back.

Turrets of UH (Unholy Hellbringer) shoot swarm drones that have g.battle, g.swarm and g.carrier stats, and barrel at back has unknown purpose. Perhaps it is used to boost up the boss. Health and experience are unknown.

Since in this state this boss is one of the weakest bosses in Woomy, you can easily kill it solo.

So, you should have a bullet spammer tank, like Twisted Hybrid. Just aim at the boss and shoot at it, but make sure you have high HP, otherwise boss will kill you. If you are attacking boss and you are at low HP, run out of the boss until you will have enough HP. 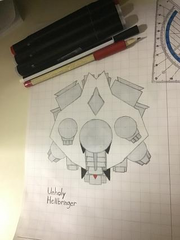 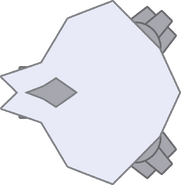 Unholy Hellbringer in it's current state.

What Unholy Hellbringer is supposed to look like. (Made by CAPTAiN*C#9349 on Discord)