The Unnamed Boss 1 is a TESTBED boss that was added on a unknown release date.

The unnamed boss's Triplet turret is strong and has the bullet speed of a Nailer. Traps could 2 shot players and drones are strong and could kill players. It is also as fast as Overlord drones. Subduer cannons are weak and are most likely not to kill a player.

currently does not spawn

Like I said, it should be hard to kill it and it has some defense because of its Traps. Ok, now lets get going. You need 5 c+e Hexa builders to block out some bullets. It is best to put them on c+e because it won't fire in wrong directions. Now get a Booster branch tank to distract the boss. You could also get a Smasher branch tank to lure drones away so it could be easier to kill it, Mega smasher and Smashception work the best because they are fast. Now get 3 Hexa blasters to eliminate traps and the remaining drones. Make sure they have c+e on them too. Now get a Splitter to drain health. Also get a Acid to melt health and you defeated this boss. However, it is best to use Kasane to melt its health 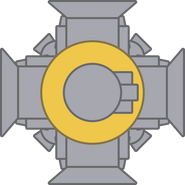