The Vacuole is a boss that was added with the release of the game. Currently, it is on the TESTBED bosses branch.

Vacuole despite having low RoF has surprisingly high penetration, capable of killing unaware players pretty fast. Since bullets have high speed and fired at you from seven turrets, it will be hard to dodge them all. As such, no single tank can kill a Vacuole, but a tank with the right strategy or team can easily accomplish this task.

If you are fighting Vacuole in solo, it is advised to lure it near an obstacle. It has a very large FoV, so keeping a safe distance will not be a problem. After it is near a rock if you are a minion, drone, or Builder branch tank you can easily shoot Vacuole from behind the rock. Make sure to keep at least two rocks between you and the boss, as its auto-turrets can poke through a single rock and shoot you. This way, you can prevent Vacuole from hitting you while dealing decent damage to it. Another method of killing Vacuole involves attacking it with multiple players - one player distracting, ideally a Trapper or Grower branch tank, and a player attacking it. If you are an attacking player, make sure to choose a tank with high DPS in order to make sure Vacuole will die before killing the distracting tank. 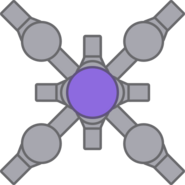 A high resolution image of Vacuole
Community content is available under CC-BY-SA unless otherwise noted.
Advertisement