The Vanguard is a Nest Defender boss that was added with the release of the game.

Vanguard has high speed and like most Nest Defender bosses, medium health. Its trap launcher is used to primarily accelerate the boss, but traps also have high damage, health, and penetration, as well as protecting the boss from the back. Its auto-turrets are very strong, capable of penetrating any tank with low RoF. The unique feature of the Vanguard is that it can turn invisible if no players are nearby. At the moment it is invisible, it cannot be seen on the minimap.

Since Blizzard and Splitter are both high DPS and decent ROF tanks, they have high chances of taking down a Vanguard. However, at the same time, if you are not careful a Vanguard would easily ram you. It doesn't have much ROF or DPS, especially against bosses, but VPN would be the best tank for killing Vanguard, as it will only attack if a non Incognito player or bot is in the same direction as you. If you attacking a Vanguard, always have high bullet penetration and movement speed, as if you have either of these you will likely die to this boss.

One thing is unless you have the chance to 1v1 the Vanguard, do not use tanks with a low rate of fire, as they will get penetrated by surprisingly strong bullets. If you a drone tank or a minion tank with not much speed, try the following strategy. Firstly, lure Vanguard near a rock, while keeping maximum possible distance. Then, move to the opposite sides of the rock and start charging your drones/minions at the Vanguard. Boss will die quickly in this case.

If you are faster than a Vanguard and also have decent bullet damage, you have a different strategy. Firstly, make Vanguard follow you. Then, at a times shoot at the Vanguard with your primary cannon. As the boss has less Shield and health than most bosses, it will take some damage.

Another way of killing a Vanguard is by luring it near a rock, this works ideally with drone and minion classes. Lure the boss near the rock, and come to the opposite side. Always stay at the opposite side, while charging your drones/minions into the boss. This way, it will die quickly.

A Shooting Star with a Vanguard

An Incognito shooting a Vanguard

A Vanguard successfully killing a Mothership 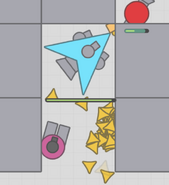 A Vanguard in a maze locked on a bot, spectated by Twinceptionist

Vanguard being slowly killed by blizzard 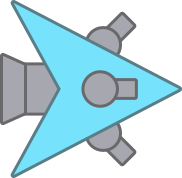 The Vanguard
Community content is available under CC-BY-SA unless otherwise noted.
Advertisement