Vis Ultima is a boss that was added with the release of the game.

Vis Ultima has a green seven-sided body, similar to Vis Destructica, only with a slightly larger gap in the middle and larger size. Between its two 'wings,' there is a spawner that spawns Vis Destructicas, slightly weaker than the normal version. In the front it has a Corroder turret. On top of each wing of it has an auto-turret which resembles a Pelleter turret.

Vis Ultima spawns Vis Destructicas, which can kill players very fast by crashing into them. This means that players without bullet spread and/or high DPS will die pretty fast. The turrets fire on the closest player. The bullets deal high damage and have high speed, but low penetration. The Corroder turret fires a slow but powerful bullet which is harder to penetrate, and can instakill a player. The Vis Ultima has a very large hitbox compared to its visible body, as shown by the size of its health bar. Also, it has low Shield capacity.

Vis Ultima deals heavily focused fire: only tanks with high penetration, like Mini Gunner, can penetrate it. The Vis Destructicas are a larger problem. They come from two sides, and can easily kill a player. Also, Vis Ultima moves with relatively high speed for a boss. Slow-firing tanks are useless, minions and drones will not be able to out-damage it (unless you are in a maze - see below). Redistributors can eliminate most of the boss' health, but will die shortly after.

High-DPS tanks, with medium spread and low bullet speed, are ideal. The boss will mostly reside at the nest, so use it to your advantage and attack first. If you have the correct tank - Machine Gun branch is ideal - you can kill Vis Ultima in solo. Note that this method will require decent skill, open space, and absence of other hostile players: Vis Ultima will outgun you in closed spaces and all your firepower is required to kill it, so you are defenseless against other players.

If you are in a maze, minion tanks are the best: your minions will ram into the Vis Ultima and deal heavy damage to the boss. All of the projectiles will be tightly packed, but your minions are more durable. If using this tactic, high respawn rate is advised.

Multiple players will eliminate Vis Ultima even faster. One player can distract the Vis Destructicas and another one can penetrate the auto-turrets' fire and deal damage. The boss will die before it's able to kill either player. 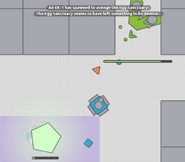 Vis Ultima in maze, near a Necrolooker and a Green Beta Pentagon