Xyv Wdtcfgzsezgk, officially The Implosionist and usually known as the Xyv, is a mildly common boss that spawns the three original Diep.io bosses (Guardian, Summoner, and Defender) upon death. It has an extensive lore surrounding it. The nonsensical sounding name that it owns is really an encryption of "The Implosionist."

The Xyv was added to Woomy-Arras.io on 15 February 2019. It was nerfed in many ways on 16 March 2019, and on 14 September, it gained a second phase where it spawned the three bosses it is based on: Guardian, Summoner, and Defender. On 5 June 2020 the Xyv's Guardian drones were patched, and are now unable to enter team bases.

There is much lore surrounding the Xyv. These are the known disconnection phrases used:

This is indicative of the Xyv. It has the Defender's guns and traps, the Summoner's squares, and the Guardian's drones. The color also seems to be a merger of the three colors.

This gives the true meaning of the Xyv's unpronounceable name.

The Xyv is unstable, meaning that when it dies it splits into the original bosses, which are only held together by the 11th side. The Fusion ends when the Xyv ends.

The Xyv is not a boss; its a moving house in the lore. However, the bosses defend it so well that it acts and moves like a boss.

The Xyv is an orange 11-sided base with 3 trap barrels on the back, 4 Summoner Square spawners on the sides, 3 defender turrets on the front, and a single Guardian drone spawner on top attached to a tapering turret. In this way, it has all the defenses of the bosses, making it tough to fight and tougher to kill.

The Xyv has a reasonable movement speed for a boss and can even chase players. The FoV of the Summoner drones is about 20% of the map's width, but the Guardian's drones can chase up to 60%. The Xyv can continue to lock on even if you are on the opposite side of the map, although it usually finds a closer target. The Xyv has 600 health and gives about 50000 score upon death.

The Xyv spawns regularly, and is most common non-sanctuary spawned boss.

Upon death, it spawns the Guardian, Summoner, and Defender in close proximity to each other, making for a second, sometimes more difficult phase of the battle.

When fighting the Xyv, keep in mind that even with a maxed out build, it is still highly likely the drones will still be able to outflank you, including with a Twisted Hybrid. Teams are necessary for defeating this boss. Even after the first boss is defeated, there is still more to come.

If you don't want to fight the Xyv, just get a strong VPN bullet build and it will be dead quickly, as will the bosses it spawns.

If you however want to eliminate Xyv in 1v1 and get all the score yourself, try leading it into the corner of the map. After that use either a minion/ drone spawner to out damage it, or choose an octo-tank branch and slowly circle it around an indestructible obstacle. Both methods take a long time, meaning that if another player comes you will likely be dead. The Splitter is by far the best tank to use with this method, and one of the only tanks which can kill this boss in solo. 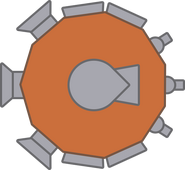